Located in the eastern part of Thailand, Koh Chang is an island famous among backpackers. There is only one main road, connecting *almost* the entire island. Perhaps, one day the road will eventually connect the island’s southern villages so people will no longer need to drive for hour(s) to get around the island.

Transportation in Koh Chang is a monopoly; only Song Taews (small pick-up trucks with two-row seats) are available. The price for taxis depends on distance — and negotiation skills. Though many tourists rent scooters or cars, we prefer to use Song Taews as our primary means of transportation, as we are inexperienced and not used to the the island’s winding roads with sharp turns along the hills — and we can afford it, so why not? 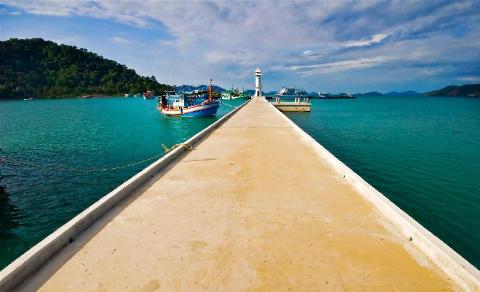 The first day, we took a taxi from our hotel to Bang Bao, a fishing (gypsy) village with houses, shops and seafood restaurants built along a pier out into the bay. We stopped for lunch at Ruan Thai Seafood Restaurant and ordered Thai-curried seafood custard served in a young coconut — or as it’s called in Thai, Hor Mok Talay Mapraw On. The red curry and coconut milk are a perfect combination. We also tried fried fish in sweet fish sauce served with mango salad. The freshness and sourness of the mango salad perfectly balances the oiliness of the fish. We could really taste the flavour and sense the freshness of the seafood. The visit to Ruan’s was definitely worthwhile.

The next day, we took an *almost* round-trip island tour. We started out at the Khlong Phlu Waterfall. Although we had to watch out for the slippery path, it’s was a pleasant, though humid, walk though the jungle. Afterwards, we visited a Chinese temple which the locals visit to pay respect to the island spirituals, believed to be guardians of the island. We also visited a mangrove forest and walked along the long and old boardwalk.

We enjoyed the nature and life of local people. Before we headed back to our hotel, we asked our taxi driver to find us a famous restaurant in the area. His recommendation was Salakphet Seafood & Resort, located further south from the mangrove forest, where the road, had it been completed, would have connected Salakphet to Bang Bao.

Salakphet Seafood & Resort serves very delicious and fresh seafood. We particularly enjoyed the crab meat sausage aka Hoi Jor and the fried fish with sweet and spicy sauce. For drinks we chose watermelon with ice and Thai iced coffee. It takes time to cook each dish, so be patient. It’s well worth the wait.

The last day at Koh Chang, we went to a nearby hippie restaurant called Porn’s Bungalows. The food is reasonably priced and served with high-quality ingredients. In addition, Porn’s has a million dollar view of the beach. In fact, while we were there, a film crew came in and inspected the location. You should visit before it gets too popular.