Back when I was a student in a school in Bangkok I once went on an excursion to Kanchanaburi to experience and learn about World War II. Today, years later, my memories of Kanchanaburi mostly revolve around heat, railway tracks and “a cemetery of Western people”. Never in my wildest dreams did I imagine that I would one day be back, and this time with my ‘Western’ boyfriend. 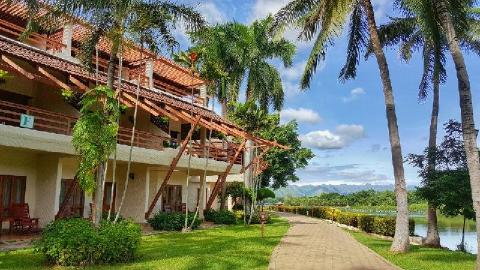 We arrived in Kanchanaburi late in the afternoon and walked from our hotel  (on the “wrong” side of the water!) to the infamous bridge — yes, that bridge — the actual Bridge on the River Kwai. When the sun set,  an old train arrived and stopped at the adjacent railway station much to the delight of on-lookers who were quick to jump out of the way and bring out their cameras to capture the majestic sight.

It had been a long day, so we were getting hungry. Luckily, there are plenty of eating options along the tracks. We rolled the dice on Thai Orchid Coffee Corner for a quick meal. The restaurant is conveniently located right next to the station, overlooking the bridge and the river. We had a good chat with a senior waitress, who was extremely helpful and friendly to tourists.

The second day we took an early train. Or at least that was the plan. At 5:45 a.m. we were ready for departure as scheduled. Only, there was no train in sight. The train had broken down the day before and spare parts were in short supply. But at 9:00 a.m. we were finally on our way, traveling along the Death Railway on route to the Hellfire Pass.

At Nam Tok, which is the final stop on the current railway line, our driver for the day, Mr. Kang, picked us up and took us the rest of the way to the Hellfire Pass Memorial Museum, around 15 km from Nam Tok station.

After making the grueling 2.5 km walk through what is left today of the Hellfire Pass, we had arranged for Mr. Kang  to pick us up at the end of the pathway. Which, it turned out, was a good dicision, since the walk is hot and humid and requires quite some agility. So the idea of walking back was not exactly tempting.

Fortunately, we had brought water, which was a absolute necessity.

The Hellfire pass was a project that seemed impossible, and in hindsight it was shortsighted, too, as the railway never really became the strategic focal point it was invisioned to be. It was ultimately closed shortly after the war.

As an IT developer, I’m all too familiar with poorly conceived ideas.

Around 2:30 p.m. Mr. Kang drove us back from the Hellfire Pass. He made a stop at a small waterfall before dropping us off at Nam Tok station just in time to catch the last train back.

Unlike the outbound train, which was virtually empty, the inbound train was fully packed. And with each stop along the way new groups of tourists jumped onboard. After 2-3 hours we arrived at River Kwai Bridge station.

Having had such a pleasant time on the first day, we once again decided to sit down af Thai Orchid Coffee Corner for dinner. We went for papaya salad, minced pork salad and grilled chicken with sticky rice. We then turned our attention to the itinerary for the next day. And luckily, the waitress was just as talkative as on the first day. She gave us some greats ideas for where to go and what to see.

Thus, on the third day we took a city day tour with a scooter taxi with sidecar. Mr. J, our driver, was also our tour guide. He took us to the Death Railway Museum (also known as the Thailand-Burma Railway Centre); the Kanchanaburi War Cemetery; the Chungkai War Cemetery; a couple of temples and caves; a viewpoint overlooking Mae Klong River; the WWII & JEATH War Museum; and a fancy café.

We were amazed at how many sites we were able visit in one day, and how cheap it was to get around the city with Mr. J.

We saw some unexpected things too. Like an elderly Muslim woman, with a group of Indonesian fellow travelers, laying flowers and crying at a tomb stone of one of the PoW’s at Kanchanaburi War Cemetery. That was a touching moment and a reminder that religion does not always devide people.

We also visited the Dragonhead Cave Temple which, as the name suggests, is a temple in a cave. Only, it does not go down. Rather, it is a 2 km steep uphill walk.

The story of the temple is like the story of the Jedi; like a Star Wars story penned by George Lucas himself. According to the myth, hundreds of years ago a wealty man found the cave and invited a proficient monk to be its first abbot. The abbot gained respect by villagers, and the wealthy man’s son only soon joined as an apprentice.

As an apprentice the young man saw the monk coming and going from the secret cave and soon got curious to learn more about it. The abbot warned him, though, that he was not yet ready to go in.

When the young man finally got his wish, the abbot went in and came out the other side. As for the young man however, well, his mind was not clean from dishonestly, fraud, and lies. So unfortunately he was poisoned by the spirits of the ‘Dark Side’.

When the abbot found out, he negotiated with the ‘Lord of the Dark Side’ to spare the life of his apprentice.

The young man was sick for seven days but ultimately passed away. Obviously, no one was going to believe in this story. So the abbot, feeling burdened by responsibility, decided to close the entrance to the cave so nobody would ever be led astray again.

Compared to other provinces in Thailand, Kanchanaburi is ancient and historic and has a lot more to offer than we initially thought. Also, the local people are extremely helpful, sincere and informative. In fact, as far as trips in Thailand go, surprisingly, this was probably the most impressive trip we have had so far.