December is one of the hotter months of the year. Wearing suitable attire, such as light clothing, hats and sunglasses in daytime is a must. However, we forgot that the suggestion does not apply while we spent 3 hours on the plane–we were covering ourselves with blankets and winter jackets. Finally we arrived at Ayers Rock airport, a small airport in the middle of desert. Once we stepped off the plane, the heat attacked us in no time. The temperature almost approached 50 degree Celsius. How could we survive?

While we were sitting and swiping flies inside the airport, we and the rest of tourists were picked up by an ATT Kings bus driver to Ayers Rock Resort. The resort has four hotels. We stayed at Sails In The Desert, the most fancy one among the four hotels. 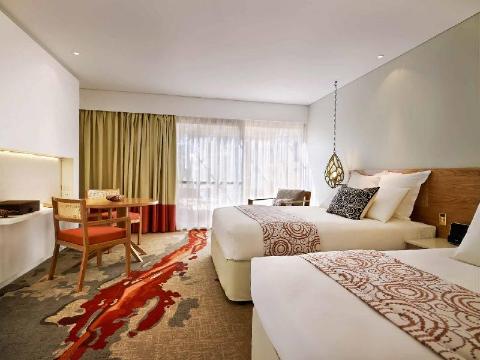 After we checked in at the hotel, we had a pre-dinner at Walpa Lobby Bar inside our hotel. Most of the dishes have indigenous flavours. We tried Sumac spiced calamari, and a seared potato gnocchi with Emu chorizo sausage, green peas, grated feta, preserved lemon, caraway pangrattato. We were impressed by the quality of the food. It turns out to be our favourite place to dine while we were there.